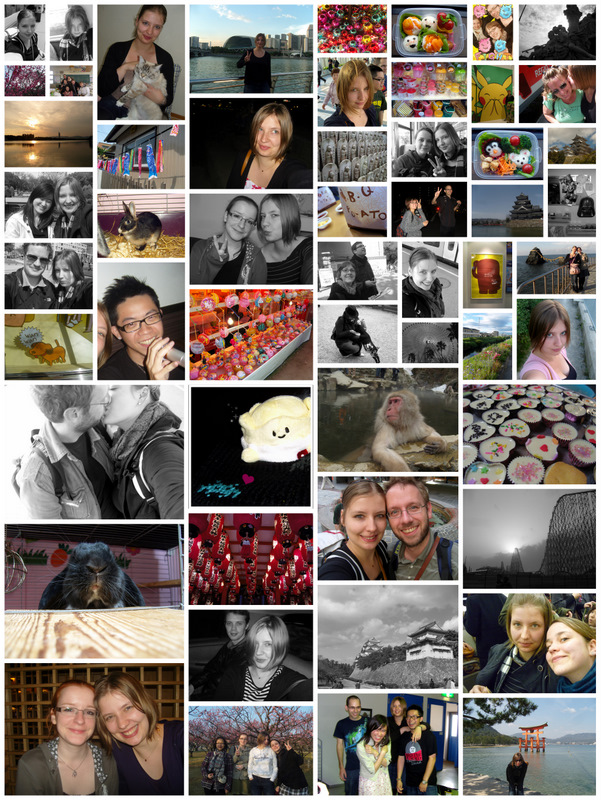 January
I started into this year with ringing the temple bell and drinking sweet rice wine at the shrine. I visited Nagoya and Kobe, saw my first 3D movie and helped students to make mochi (rice cake) at a Japanese elementary school. I accepted that an old love had died and bore the consequences while a new one bloomed.

February
I spent February head over heels but even more headless in love and broke my heart a million times. Threw beans at an oni (demon), visited an onsen (hot springs) and made valentine’s chocolate that I finally ate myself. I cut my hair in order to cut of the pain. Some of my best friends visited me in Okazaki and together we had okonomiyaki and sushi, went to Karaoke, and visited the park to see flowering plum trees.

March
Worked on turning love into friendship and not to forget my most important friends because of love. I had even more okonomiyaki and onsen, beat the longest and 2nd highest roller coaster of the world and spent a night stranded in Nagoya. Term ended with a visit to NHK and a trip to Nagano where I saw wild monkeys. Strolled around Himeji castle. Two more of my best friends came from Germany and together we enjoyed Hiroshima’s atmosphere, watched Ponyo and cherry tree blossoms.

April
Made the scarf of sugoi awesomeness +1 (namely the space invaders scarf) and had to say goodbye, but was lucky enough to have friends that caught me when I fell.

May
I finally started to find happiness within myself. Deepened friendships and felt the overwhelmingÂ  joy of being part of C class – a group of people where I simply I belonged. Saw Nagoya zoo and tea fields in Nishio. Spent more times at book off than anywhere else

Sent a birthday mail that triggered a chain of events to affect the rest of my life. Spent one of my most wonderful days this year at the Ise grand shrine and at Futami to see the wedded rocks.

June
Lived a perfect, happy life. Saw my first baseball game, made gyÅza, ate at a running sushi restaurant and tried unagi (eel). Became otÅ-san and came to love my class and friends even more. Sent home what felt like 100kg of manga and other important *cough* stuff. At the end of June it was finally time to say good bye and fly home but with a stop over in Singapore where IÂ  enjoyed a sightseeing tour with an ambulance

July
Back home I re-discovered my adorable apartment and realized how much wealth in form of friends I had left behind. Celebrated my birthday and gave my heart to someone new within no time. Together we talked and laughed the nights away before we finally got together on July 18th. Baked bread, killed wasps and baked cakes.

August
Made a lovey-dovey trip to Vienna where I relaxed in front of the Hofburg, saw the city from the ferris wheel, visited the zoo and strolled around Schönbrunn Palace. Lots of packages from Japan arrived. Was kidnapped to Croatia.

September
Made even more cakes and visited my Dad to pick up my dwarf rabbits. One of them hadn’t changed, the other completely. Looked for a new job and found one within four days

October
Start of the new semester at University. Learned that a goat can sometimes be an iguana when a pot-bellied pig is a dog, Leonie. Overturned the Lord of the Sith and celebrated Hallowe’en as a sparkling vampire.

December
Winter Wonderland. Wrote my first Japanese exam, came to the conclusion that university is a certain kind of fun (when you’re not writing exams) and enjoyed christmas time as much as possible. Everything is a little more glittery with a Mr. Perfect by your side.